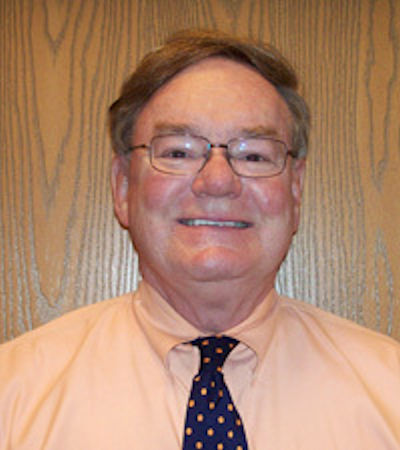 I grew up in Upper Arlington, a suburb of Columbus

Were you the first optometrist in your family?

My grandfather was technically an optometrist (before that was an official title) in Findlay, Ohio, in the late 1880s/early 1900s and worked as a jeweler who sold spectacles, and then learned optometry through correspondence courses and on-the-job training.

Why did you choose to attend Ohio State?

Ohio State was close to where I grew up, so it was a comfortable fit. After graduating in 1964, I served as an optometry officer in the Air Force for three years and then returned to the College of Optometry for more coursework which had been added for the O.D. degree.

Name a mentor from the College of Optometry or a person who had a positive effect on your education.

Two definitely come to mind: Professor Brad Wild and Dr. Boyd Eskridge, just in terms of how they demanded excellence from their students at all times. Dr. Glenn Fry was also an inspiration because of his dedication to the program and his inspiration to do research.

Where do you practice, currently?

I opened up my first practice in Upper Arlington called Northwest EyeCare Professionals in 1968 and five years ago sold it to another Ohio State Opt graduate, Douglas J. Bosner, O.D. I opened up my second practice, Mt. Sterling EyeCare in 1980. In addition to private practice work, I have served as a clinical instructor at the Ohio State College of Optometry, teaching areas of general optometry, orthoptics, and visual perception. I also am involved part time doing consulting work and serving the children’s vision department at Ohio State Optometry.

Briefly explain some of your daily job responsibilities or patient interactions.

In running my own practices, I can definitely say that I have been involved in nearly every aspect of primary care optometry, taking care of patients from as far back as 1968. Primary care, however, has evolved as a whole with more drugs and secondary treatments becoming involved in the process, so it has been important to stay active in Ohio Optometric Association and the Ohio State Alumni Society. It’s not work, but rather a pleasurable experience.

Tell us a special story that relates to your career now.

I often get inquiries from teenage girls asking if I am related to Justin Bieber or if I am his grandfather. They always seem to be pretty sad when I say that I am not sure if we are related or not. But, at least people finally know how to pronounce my last name, because prior to his popularity, many patients would get it wrong!

Aside from having fun with my last name, I am especially fond of the day to day triumphs when you make a difference in someone’s life, especially with children. It’s incredible how my career has provided me the chance to open up a whole new world to them and then hear from the parents years later about what a life I have created by diagnosing their child’s vision problems at an early age. I’m just so happy to hear about children who go on to become better scholars or generate wonderful success stories from having been in my office - for that I am extremely grateful.

What’s one thing you learned during your education that has affected you most in your career?

One of my mentors after graduation told me to "always go first class." This meant to get the best equipment and staff possible as a guiding principle for operating any practice. Then I had another mentor who said he would always try to "out-nice" the other guy whenever it came to business. Finally, there was Herb Mote, an administrator at Ohio State, who said, "you make your money off the easy patients but you make your reputation off the difficult ones." All three of those quotes have resonated with me throughout my career.

Why did you choose a career in optometry?

In high school, I wanted to be a veterinarian because of my love for animals and being out in the woods as a kid. But as I matured, I became more interested in people and then decided that I wanted to be an optometrist. I always liked science, but not blood or the gory stuff that came with practicing medicine, so optometry seemed like a nice, clean profession and allowed me to help people.

Which optometric issues concern you the most?

Losing control of our destiny to some degree as it relates to big government and insurance companies, forcing expenses on us that are difficult, and the effect of third parties on how we practice are some of my major concerns. I think this is why we need organizations like AOA, OOA, and the Ohio State College of Optometry Alumni Society so that we can stand together and fight for what is the best care.

Why are you passionate about your career?

Optometry is unique in the sense that we nearly always have good outcomes with our patient encounters, in terms of helping the patients see better, look better, perform their specific duties better, and to live a generally healthier life. To be able to do so many positive things in someone’s life makes optometry worthwhile.

For someone aspiring to this profession, I would say to give it your best in classes that often may feel irrelevant, because of what they teach you in the long run. It is also important to remember a work/life balance with your family in order to be happy overall. Take advantage of your practice management courses and the exposure to running a business because that is extremely important as well. But generally speaking, optometry is like one big family and you constantly are renewing your acquaintances with people in an open and friendly manner.

Most memorable moment(s) at Ohio State.

My favorite moment was when I met my wife to be in front of the Epsilon Psi Epsilon (EYE) Fraternity House on 12th Avenue in the spring of 1964. We were in the process of hosting a party for prospective students and I saw two pretty ladies walking down the street, one of whom who would be my future wife, and I invited them inside to join us. After I introduced myself as "Jim Bieber- the nice guy," my future wife and I would go on to date and be married for 49 years.

How would you say that the school has changed since you left and what are your opinions?

We have made so much progress with this college moving forward, especially with the physical facilities and improving our philanthropy. In addition, we have some great leadership and quality people who know how to make a first class organization run smoothly. Dean Zadnik’s passion is great and I think we’re definitely on the right track to continue being the best optometric school in the country.

What does Ohio State education mean to you?

I’ve gotten the best education and been able to add to it over time through having been in that transition group from BS/OD. We had to take special classes and certification courses that have now become an integral part of the program. It was great to see how the school made the OD licensure available to all of those who graduated with a bachelor’s and we were able to come back to get the OD degree. Again, I truly believe that I was provided the best optometric education in the country.

I used to play tennis a lot, but after developing hip problems and multiple surgeries I had to stop. I am constantly trying to learn how to cook and taking care of things around the house. I have stayed involved in my community and do projects such as raise funds for the Childhood League and distribute food from the community center in Clintonville. I have always enjoyed following and watching Ohio State football all of these years as well.

I wanted to be a vet in high school and architecture was appealing too after reading Ayn Rand’s The Fountainhead. I decided to give up on architecture because of the lack of control and being told what to do as the client wanted it, rather than what I thought would be the best.

Favorite time of the year:

I do enjoy Thanksgiving and getting together with my children, especially because I don’t have to worry about presents and can just focus on food! Generally speaking, I do love the seasons we have in Ohio and all of the various activities that come with them, like football in the fall.

The Eagles. I recently saw them in the Schottenstein Center and it was great.

Peter Paul and Mary at the Mershon auditorium

If you or someone you know would be a good candidate for an Alumni Focus feature,
please contact Michael Haddock at haddock.15@osu.edu